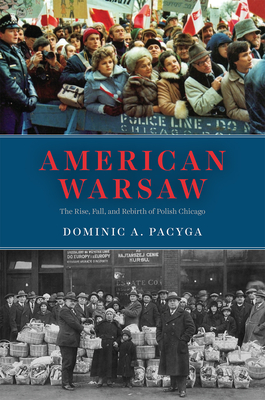 Every May, a sea of 250,000 people decked out in red and white head to Chicago’s Loop to celebrate the Polish Constitution Day Parade. In the city, you can tune in to not one but four different Polish-language radio stations or jam out to the Polkaholics. You can have lunch at pierogi food trucks or pick up pączkis at the grocery store. And if you’re lucky, you get to take off work for Casimir Pulaski Day. For more than a century, Chicago has been home to one of the largest Polish populations outside of Poland, and the group has had enormous influence on the city’s culture and politics. Yet, until now, there has not been a comprehensive history of the Chicago Polonia.

With American Warsaw, award-winning historian and Polish American Dominic A. Pacyga chronicles more than a century of immigration, and later emigration back to Poland, showing how the community has continually redefined what it means to be Polish in Chicago. He takes us from the Civil War era until today, focusing on how three major waves of immigrants, refugees, and fortune seekers shaped and then redefined the Polonia. Pacyga also traces the movement of Polish immigrants from the peasantry to the middle class and from urban working-class districts dominated by major industries to suburbia. He documents Polish Chicago’s alignments and divisions: with other Chicago ethnic groups; with the Catholic Church; with unions, politicians, and city hall; and even among its own members. And he explores the ever-shifting sense of Polskość, or “Polishness.”

Today Chicago is slowly being eclipsed by other Polish immigrant centers, but it remains a vibrant—and sometimes contentious—heart of the Polish American experience. American Warsaw is a sweeping story that expertly depicts a people who are deeply connected to their historical home and, at the same time, fiercely proud of their adopted city. As Pacyga writes, “While we were Americans, we also considered ourselves to be Poles. In that strange Chicago ethnic way, there was no real difference between the two.”

Dominic A. Pacyga is professor emeritus of history in the Department of Humanities, History, and Social Sciences at Columbia College Chicago. His books include Polish Immigrants and Industrial Chicago: Workers on the South Side, 1881–1922; Chicago: A Biography; and Slaughterhouse: Chicago’s Union Stock Yard and the World It Made, all from the University of Chicago Press. Pacyga is the 2014 Mieczysław Haiman Award winner for exceptional and sustained contribution to the study of Polish Americans.

“American Warsaw is something new and necessary, a book Chicago didn’t know it needed until it showed up. American Warsaw chronicles the unique nature of Chicago’s ‘Polonia’—its community of Poles and Polish descendants outside of Poland. Pacyga tells the story of how Chicago came to have such a large Polish population, and to even be considered a part of Poland in exile, the ‘fourth partition’ of a country that had been divided between Prussia, Austria and Russia before 1918. Chicago was ‘Poland elsewhere,’ where immigrants juggled becoming American with trying to hang on to their sense of Polishness, or polskosc.”

“There’s probably not a person in the United States—and certainly not in Chicago—more qualified than Dominic Pacyga to document the path Poland’s citizens took in emigrating to the United States. . . . Through tireless research, Pacyga develops a perhaps unintended thesis: that the current issues of the immigrant in Chicago and in the United States have been played out in cycles over the last century-and-a-half. . . . It’s haunting to discover in American Warsaw that history and language have repeated themselves. The Poles at the beginning of the twentieth century are now the Mexicans, Central Americans, Ethiopians and Syrians in Chicago a century later.”
— Newcity

“The dean of Chicago historians has fashioned an exceptionally clear, yet nuanced interpretation of one of the city’s largest ethnic groups. American Warsaw is much more than the story of an ethnic community. It is a clearly written, insightful investigation of the internal and external forces that shaped the development of Polish Chicago, its relationship to the broader urban area, and its interaction with its ancestral homeland.”
— James S. Pula, author of Polish Americans: An Ethnic Community

“This highly readable story of Chicago’s Polonia could only have been written by an accomplished social and urban historian, who, as a born and bred Chicagoan, also knows the city in an organic way. Basing his account on the wealth of his previous research, Pacyga presents a comprehensive portrait of an important ethnic community seen through its organizational activities as well as everyday lived experience. American Warsaw, set against the backdrop of both American and Poland’s history, tells the story from the earliest decades of Polish immigration to the United States to the most recent period.”
— Anna D. Jaroszynska-Kirchmann, author of The Polish Hearst: Ameryka-Echo and the Public Role of the Immigrant Press